How did today sneak up on me? Another day off school. I know, I know- no one wants to hear another rant about how I can't handle one more day off school for the kids. So I won't do that, well I might a little bit. Things had actually been going my way, the kids slept in until 7:30.  I had a hot breakfast made (no kidding, I absolutely did!). Jacob had a ride to practice so I didn't have to pack everyone up to go in the cold for a few hours. No one had lost their mind yet. It was shaping up to be great day.
Then we did our rituals of shapes, colors, numbers, puzzles, books, videos, changing, a second full meal and before you know it 9:00 am rolls around. Then the text came in, my reinforcements, whom I affectionately call anyone that is  brave enough to come in and help with the kids, was sick and unable to come. So that sent my optimistic outlook on the day spinning down, down, down. I decided we would do one more round of songs, usually a repertoire of Taylor Swift videos, and then everyone was going to play by themselves for a few minutes/seconds.  Ha, ha!  No they weren't, but dare to dream.
Let the meltdowns begin!
We had a meltdown over a box of Raisin Bran dumped on the floor and then another meltdown when a huge bag of pretzels also made their way out of the bag all over the floor. Ironically, neither a food the dog will eat so there was significant clean-up. Obviously when I say "we" had a meltdown, I, of course mean "me", no one else cares if there is crap all over the floor, they don't have to clean it up. So, I had slightly raised my voice at Elizabeth because she was shaking the box upside down when it launched and flew into three rooms, then I yelled at Johnny for walking through it and laughing hysterically at the crunch sound as I was trying to clean it up, and then I yelled at Jacob for not getting up to help me, turns out he couldn't hear me because his Beats were on and they drown everything out, interestingly enough my voice is the one thing he consistently can't hear. Since it was still early, I had to figure out a way to keep my temper in check so I went to my "go to" strategies for not walking out the front door never to return.

Suddenly, I felt something in my neck pop. I'm not trying to be funny or sarcastic now, it was really scary. What comes next, however, might be borderline weird-my mind immediately went to Julia Roberts in Steel Magnolias where she is lying on the floor and her baby is crying for her and Dylan McDermott finds her unconscious. Horrific. Elizabeth had lost my phone hours ago, so if something happened, how would I let anyone know?  What would the kids do?  Who would take care of them? How could Dylan, I mean, Adam, do it alone?
A tad over dramatic as it turns out, I was fine. Thank goodness. The day did not slow down or get easier from here, however I was more grateful for anything good that happened, rather than focusing on the bad things that kept creeping in. 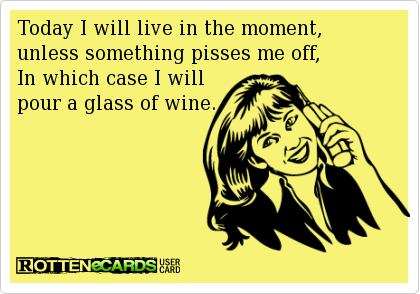 This evening, because we had all made it through the day relatively unscathed, I decided to do my Gratitude entry at the end of this post because I was appreciative for a fire, a glass of wine, and eventually, silence. Also, I need to get out some positive energy because the weather forecast tomorrow looks less than promising (eek  : /).

If you're still with me, thanks, that in and of itself takes patience. Below is what I am grateful for today:
I am grateful to Martin Luther King for blazing a trail that has made the world a significantly better place.  I am grateful to the women that went to work today and held it all down so our daughters can continue to take over the world. I am grateful to moms who won't get a break at all this morning, afternoon, and tonight and will keep doing it all the best they know how and then again tomorrow-you are my motivation! And I am especially grateful tonight for this venue to list all my shortcomings and hopefully, become a better Mother for it!
Posted by Mary Claire Brass at 9:00 PM