Ah the weekend, so relaxing for some so very not for others.  There is always a lesson found in the weekend chaos....I have noted a few.

John will stick his hand in the hot oven if he wants pizza badly enough or if he wants it just a little bit.

Elizabeth's spatial reasoning is an issue. She will be playing "innocently"  on the table (yes, table, geez!) one minute and then the next- well, let's just say her landing  leaves a lot to be desired. (thankfully her behind has a lot of padding  ;/)

Hands are used to catch basketballs, not faces.

When John and the dog are eating Chipotle at the same time, out of the same bowl, I will lose my sh*@%!

Eleven years-old is the sweetest age-said no one ever.

Adam gets sick and I want to hurt everyone around me, including him, I don't care if he feels bad-I want to cut him
Oh whatever, he doesn't do anything anyway, and by "not do anything" I mean he does everything-help!

I don't know how many times I have to say it, water and electronics do not mix.

Screwdrivers and hammers are not toys, and Johnny doesn't treat them as such. My poor walls and floor.

I bet the former Presidents we are celebrating today didn't have to stay home with their kids to honor the British monarchy.  (oh boy, I'm sliding)

Watching Elizabeth try and do the hand motions for the Itsy Bitsy spider makes me forget she spilled my coffee twice before 8 am and all of the sudden everything is right with the world-thank goodness for tomorrow! 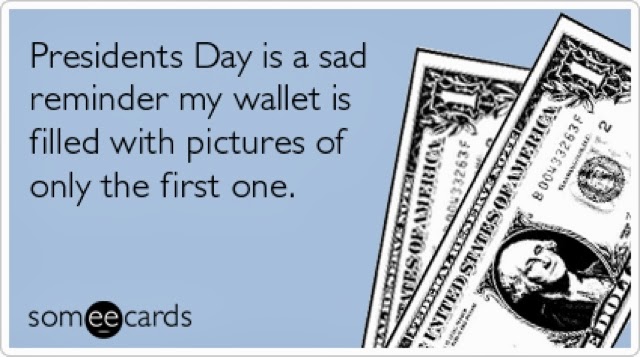